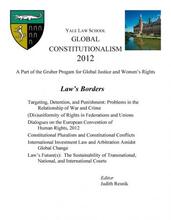 Law’s Borders raises fundamental questions about the contours and content of law in times of war and in times of peace, including which national, transnational, and international institutions have what authority to make decisions for and determine the rights of individuals. All five chapters address questions about sovereignty in and beyond nation-states, about principles of institutionalism, and about jurisdictional judicial authority.

Chapter I, Targeting, Detention, and Punishment: Problems in the Relationship of War and Crime, begins by exploring courts in times of war, including what law says or might say about practices such as “targeting” (killing) individuals that a country perceives to be its enemies, and whether rules governing the detention of opponents and the punishment of actions during war ought to resemble the legal regime governing the detention and the prosecution of criminals in the peacetime domestic context. Chapter II, (Dis)uniformity of Rights in Federations and Unions, turns to delineations between jurisdictions during times of peace, including federations and unions, and Chapter III, Constitutional Pluralism and Constitutional Conflicts, takes up specific examples of conflicts, tensions, redundancies, and coordination among courts, in part through debates about who has the authority to determine the voting rights of prisoners and access to abortions. Central to these discussions are the values served by the redundancy and multiplicity of normative authorities, the utilities of dialogue, and the role of judges in shaping the boundaries of authority.

I. Targeting, Detention, and Punishment: Problems in the Relationship of War and Crime
Discussion Leaders: John Fabian Witt and Aharon Barak

II. Dialogues on the European Convention of Human Rights, 2012