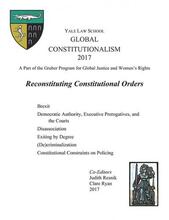 The five chapters in Reconstituting Constitutional Orders inquire into the authority exercised by constitutional courts and reflect on the political and legal shifts that have taken place over the course of 2016-2017. The first chapter, focused on Brexit and its immediate aftermath, is emblematic of a reconstitution of political-legal orders and provides a backdrop for the chapters to follow. Chapter II, Democratic Authority, Executive Prerogatives, and the Courts, considers how, within given polities, courts respond to claims that the outcomes or structures of democratic processes are unlawful. Chapter III, Disassociation, reflects on disengagement efforts across the globe. Courts have been called upon to examine the domestic processes required to authorize withdrawal and to decide what role (if any) international law plays in determining when a country can reject what were binding treaty obligations. Chapter IV, Exiting by Degree, centers on disengagement within Europe and deepens the puzzle about what disassociation means. It raises the question: when do acts of domestic resistance to what were thought to be accepted norms (such as judicial independence) become a form of disassociation from within?

The last two chapters address a historic function of sovereignty: maintaining peace and security through criminal law and policing. Chapter V, (De)criminalization, address when courts prohibit—or require—criminalization of certain activities. From sexual identity to procreation and assisted suicide, courts have addressed the impact of criminal laws on individual privacy, liberty, autonomy, and free expression. Chapter VI, Constitutional Constraints on Policing, examines how policing has come within the ambit of constitutional courts. This Chapter considers what the constitutional boundaries on policing are in terms of regulating investigations, stops, detention, and the use of force, and how the courts’ rulings reflect democratic commitments to equality and dignity, as well as transnational approaches to police powers.