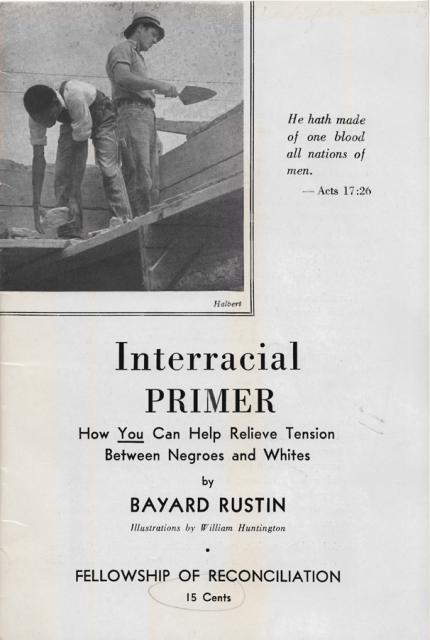 In 1941, Rustin deepened his
engagement with pacifism by taking a
full-time job with the Fellowship of
Reconciliation (FOR), an interfaith
international anti-war organization. As
field secretary, Rustin was tasked to
work toward the Organization’s newest
antiwar goal, namely to forestall the
outbreak of racial warfare inside the
United States. Rustin traveled the US—
including the South—giving workshops
on race relations, conscientious
objection, and civil disobedience and
non-violence to black citizens. In the
early 1940s he wrote an “Interracial
Primer: How You Can Help Relieve
Tensions Between Blacks and Whites.”

The pamphlet set forth what would
become a few of Rustin’s characteristic
political themes, by calling for social
accountability from each American, by
valuing work in itself, and by viewing the
workplace as one of the most important
situations where racial tensions must be
alleviated.

Permission from the Fellowship of
Reconciliation