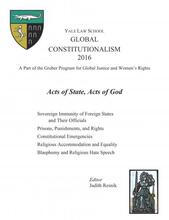 The five chapters in Acts of State, Acts of God explore the role of courts in interpreting the reach of the immunities and responsibilities of states and the limitations on the power to punish individuals and groups within and outside their borders. In each chapter, questions of remedies are at the fore, as the potential consequences of judicial action affect analyses of the priority of review.
Chapter I, Sovereign Immunity of Foreign States and Their Officials, raises questions about when and how courts ought to respond to claims of horrific wrongdoing conducted in the name of the state, including whether a consensus exists across jurisdictions about whether holding foreign sovereigns accountable in domestic courts is a matter of domestic or international law. Chapter II, Prisons, Punishments, and Rights, explores the relationship between the law of sentencing and the law of prisons. The questions are why and when courts have a role to play in deciding the forms that punishment takes, including conditions within prisons. Chapter III, Constitutional Emergencies, tracks debates concerning crises in four arenas—the environment, public health, the economy, and citizenship—in which courts are asked to intervene.
Religion is at the center of the concluding two chapters. Chapter IV, Religious Accommodation and Equality, addressed claims that religious belief should permit deviation from legal duties required of other members of the polity through generally applicable laws. Chapter V, Blasphemy and Religious Speech, explores how perceptions of the vulnerabilities of either the dominant religion or of minority groups and commitments to freedom of expression either constrain or license state responses to blasphemy, defined as speech that violates the dignity of God and more recently speech that violates the dignity of religion and religious groups.