Global Constitutionalism 2015: The Reach of Rights 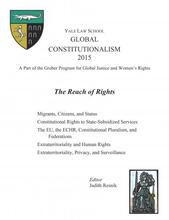 The Reach of Rights explores the crossing of borders—by migrants searching for safety, by internet technologies disseminating information, by governments seeking to enhance national security, and by courts analyzing legal claims and crafting remedies. The debates concern the roles judges play when asked to alter decisions made by other public and private sector actors. Cross-border issues are sometimes framed in terms of the “extra-territorial” implications of laws and remedies, yet in light of the unceasing movement of persons, objects, information, and rights around the globe, one might understand many of the problems to be “a-territorial,” in the sense that the land masses and political authority of nation-states do not map easily onto either the alleged harms or the remedies. The five chapters prompt questions about the durability of the spatial, territorial conception of rights, predicated on the practices of a particular body-politic and privileging the status of citizenship. In each chapter, arguments are made that, in light of constitutional obligations to respect individuals’ privacy, dignity, well-being, and their membership in families, judges ought to intervene

Chapter I, Migrants, Citizens, and Status, provides examples of courts addressing claims of non-nationals challenging the power of nation-states to make migration a crime; to disrupt citizen-families through deportation; and to link access to health, welfare, and employment to citizenship status and to discriminate in the distribution of benefits among kinds of migrants. Chapter II, Constitutional Rights to State-Subsidized Services, explores governments’ relationship to individuals in the context of “social rights” and individuals asking courts to mandate that governments provide services under the guise of constitutional imperatives—for example, by subsidizing the use of courts through fee waivers or by ordering support for health, housing, and social security.

Chapter III, The EU, the ECHR, Constitutional Pluralism, and Federations,turns to judicial authority over other government-branch decisions in another context, reviewing the Court of Justice of the European Union’s (CJEU’s) 2014 ruling that the draft European Union (EU) accession agreement to the European Convention on Human Rights was not compatible with EU law, raising questions about constitutional pluralism and the interactions among courts in federated and quasi-federated states. Chapter IV, Extraterritoriality and Human Rights,then explores whether fundamental rights alter the obligations of nation-states to individuals, within and beyond their borders, and Chapter V, Extraterritoriality, Privacy, and Security, concludes by exploring the CJEU’s 2014 ruling on “the right to be forgotten” doctrine. As regulators in and out of courts balance human rights, privacy rights, security rights, and free information rights, these legal challenges increasingly extend beyond any given nation-state’s borders.