Home » Collections » Global Constitutionalism 2014 : Sources of Law and of Rights

Global Constitutionalism 2014 : Sources of Law and of Rights 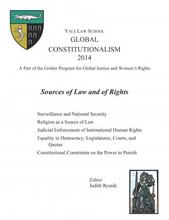 This book, Sources of Law and of Rights (ed. Judith Resnik, Arthur Liman Professor of Law), is one of series of forthcoming E-Books, disseminating readings provided for the Yale Global Constitutional Seminar which is a part of the Gruber Program for Global Justice and Women’s Rights at the Yale Law School.  The support of Peter and Patricia Gruber makes possible this sharing of ideas, actions, and aspirations in the hopes of working toward a more humane, egalitarian, and just environment than the one we currently inhabit.  This E-Book, on-line series is a part of Yale Law School’s Information Society Project and is supported by the Oscar M. Ruebhausen Fund at Yale Law School.

The 2014 book, Sources of Law and of Rights, explores several contemporary constitutional questions. In Chapter I, Surveillance and National Security,the focus is on how new technologies and concerns for national security affect constitutional commitments to privacy. After Edward Snowden began disseminating information about how the U.S. National Security Agency’s data collection reaches around the globe, a host of legal questions emerged. What law (of which country or of transnational systems) could and should regulate domestic and cross-border surveillance? Kim Lane Scheppele, Amy Kapczynski, and Allan Rosas offer a brief overview of how different jurisdictions have protected individual rights of autonomy, free expression, and free association by imposing barriers to the unfettered collection of information by governments. The Chapter editors also detail some of the many innovations—produced through the interaction of public and private sectors—that vastly expand the capacities to gather information. The result is a host of new practices and terms (“Prism,” “Bullrun,” “Co-Traveler”) that may soon be as familiar as Google. The Chapter editors map recent case law, directives, statutes, and resolutions, as they make plain the complexity of adapting theories of the state and of personal autonomy and privacy to new terrains.

In Chapter II, the question is whether claims of right sourced in religion have a distinctive status in constitutional democracies. In secular constitutional states, the law is presumptively independent from religious authority and therefore does not use religious doctrine as a source of law. At the same time, courts aim to respect freedom of association and of expression, and judges aspire to avoid discriminating against individuals by burdening their observance of religious beliefs. The challenges of doing so vary, as some faiths segregate observances by assigning particular days or places for religious expression, and other religions call upon adherents to express commitments through daily practices related to clothing, food, and prayer. Non-secular constitutional orders, in contrast, embrace religion as a source for jurists to use when rendering judgments. Yet, as the commentary and cases excerpted by Robert Post and Rosalie Abella in Religion as a Source of Law illuminate, judges in neither kind of constitutional order have simple tasks. Non-secular courts have choices to make about which religious doctrines are central to their judgments. Further, in secular orders, when courts seek to respect individuals’ religious freedom, courts encounter difficulties in abstaining from and avoiding involvement with religious doctrine.

Sources of law are likewise at issue in Chapter III but, rather than religion, examples come from the law of international human rights. In their discussion of Judicial Enforcement of International Human Rights, Alec Stone Sweet and Helen Keller address the interaction between national law and human rights conventions. Their focus is on “incorporation,” as national and supranational courts give direct effect to claims predicated on international human rights. As in the inquiry about religion as a source of law, courts have to face questions about the methods for, the hierarchies of, and the interaction among norms. Excerpting materials from many parts of the globe, Stone Sweet and Keller map the expansive opportunities judges have to interpret both national and international law in the process of domesticating international rights.

Chapter IV, Equality in Democracies: Legislatures, Courts, and Quotas, examines efforts in many jurisdictions to make good on the promise of equal citizenship through measures, known as “positive action,” aiming to promote the inclusion of groups that have, historically, been disadvantaged. The breadth of the aspirations is impressive; examples of positive action appear in domains ranging from employment, the household, and education to politics and the judiciary. Quotas are both popular and deeply contested. Individuals have argued that such positive action violates the very norm—equality—that positive action seeks to instantiate. The Chapter considers the reasons democracies are drawn to positive action, as well as the threats to democracy that opponents argue such programs pose. As Judith Resnik, Reva Siegel, and Susanne Baer explore, courts have rendered decisions upholding, rejecting, and limiting forms of positive action. In addition to examining the debates among proponents and critics, the Chapter focuses on how the interactions between courts and legislatures have shaped and have shifted understandings of the purposes and forms of permissible positive action.

Chapter V, Constitutional Constraints on the Power To Punish, edited by Kate Stith, Dennis Curtis, Nancy Gertner, and Sabino Cassese, takes up questions of sentencing. They ask about what boundaries, if any, constitutions place on sentencing decisions crafted by legislative and executive branches and imposed by judges. As the excerpted case law details, in both national and supranational courts, judges have explored when concepts such as human dignity, prohibitions on cruel and degrading treatment, prescriptions against unusual, disproportionate, or arbitrary punishments, and equality precepts limit the authority of the state to punish. The question of deference—to legislatures, as well as to state and national judgments—is ever-present, as are issues of separation of powers. Constitutional questions are also raised when evaluating the range and quality of information used at sentencing, the sources of knowledge, and the obligations to test its accuracy.

In short, across these five chapters, common questions emerge about the limits on, as well as the licenses for, government authority and about whether the power to decide about limits and licenses rests with domestic courts and legislatures or with national and supranational bodies. When seeking protection from courts, both governments and individuals argue that their vulnerabilities and needs justify court assistance. And, in each of the contexts explored, judges in their constitutional decisions interrogate the bases of their own exercises of authority.

Download 2014 Global Constitutionalism Seminar: Sources of Law and of Rights