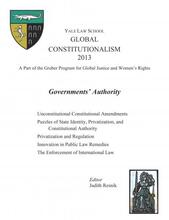 Government’s Authority takes up several interrelated questions of courts’ roles in constitutional orders, including how courts review constitutional amendments against current constitutions; the outsourcing of government functions and responsibilities to private entities or to other governments; and the use of judicially ordered remedies when interpreting government obligations under statutes and international law. Across five chapters, the volume explores how courts must consider and make decisions about the authority of various governmental institutions, including themselves, to exercise and delegate powers that are purportedly enshrined in constitutions, statutes, and international law.

Chapter I, Unconstitutional Constitutional Amendments, explores whether, how, and why constitutional amendments can be “unconstitutional.” The wealth of case law and commentary prompts reflection on whether constitutional amendments pose special or unique questions for judges concerning the standards to test amendments’ legality, and on whether judicial responses are jurisdiction-specific or transnational. Chapter II, Puzzles of State Identity, Privatization, and Constitutional Authority,then turns from the issue of a government’s capacity to reconstitute itself to a government’s decision to outsource some of its activities—either to private entities or to other governments—thereby raising questions about sovereignty and the protection of individual rights. Chapter III, Privatization and Regulation, presents another aspect of the public/private mélange, namely the outsourcing of executive, legislative, and judicial functions, including policy-making, decision-making, and standard-setting.

Chapter IV, Innovation in Public Law Remedies, follows by exploring the development of innovative remedies that courts have shaped in response to constitutional failures of other branches of government, including the authority of judges to revise (by reading up, down, in, or out) statutes so as to make them constitutional and the issues surrounding injunctions, which require government bureaucracies, such as those administering prisons, to revise their practices to comply with constitutional mandates issued by courts. Finally, and relatedly, Chapter V, The Enforcement of International Law, explores remedial authority from the vantage point of enforcement of international law and the role of courts in interpreting and implementing international obligations. The question of international law’s remedial force prompts inquiries into the conception of treaties and conventions as “law” and how those transnational agreements operate in both national and international courts.