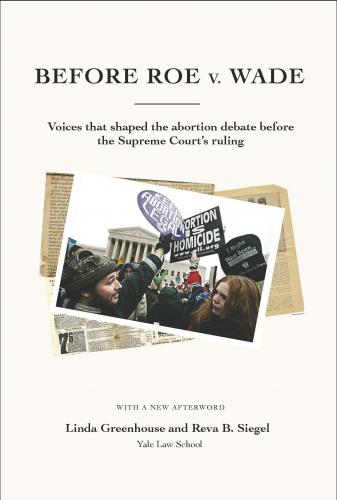 ” … a compelling review of the societal changes, incidents, and cases that led to the Supreme Court’s historic decision. Readers today will likely be shocked by the conditions that women experienced before 1973: trips to Japan for abortions; the need to lie at every step; even the possibility of forced sterilization. The authors provide commentary and context on an impressive collection of documents, moving chronologically through every stage of abortion reform to create a compilation that will engage anyone with an interest in women’s rights or judicial history.” (Publishers Weekly, June 2012)

An Afterword to this second edition explores the logic of the abortion conflict.  It shows how conflict over abortion in the years before Roe helps explain conflict over abortion in the years after Roe. This extended essay, first published in the Yale Law Journal, challenges the conventional wisdom that the Court’s decision in Roe caused backlash and is responsible for the polarized culture wars around abortion today. This widely held view cautions against relying on courts to vindicate minority rights. As the book documents, the conventional view is based on a mistaken account of the ways in which courts have interacted with actors in many civil society institutions—including medicine, religion, social movements, and political parties—in shaping the abortion conflict across the decades.

EPUB (for iPad, Barnes & Noble Nook, and other non-Kindle e-readers)